There is no doubt that there are distinct whisky regions in Scotland. However, there is considerable doubt as to the exact number of regions. Some will say three, others as many as eight. We will go with four. 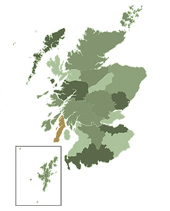 Once this town on the tip of the Mull of Kintyre had over thirty distilleries. Now there are only two distilleries in Campbeltown: Springbank and Glen Scotia. This, the smallest region, is known for a salty sweetness in its whisky. The whisky is half way between the Highlands and Islay. 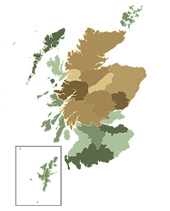 By far the biggest region is the Highlands. Bigger, brawnier, and generally more rounded than Lowland malts, the whiskies from the Highlands carry a wide range of flavors and styles. They cover a wide area, and malts from this region range from the relatively light-weight Glenmorangie to the powerfully aromatic Dalmore to the almost minty Inchmurrin, with many many variations in between. The Highland distilleries are often further sorted by specifying the river they are near (Spey, Bogie, Deveron, Findhorn, etc) These whiskies are full-bodied, smoky and peaty with a dry taste. The Glenlivet and Aberlour both come from the Highlands. North Highland malts tend to be medium-bodied and fresh-flavored with heathery, nutty notes. Those from the West add smokiness and spice to this while Central Highland malts often have floral aromas. The Speyside part of the Highlands is often described as the ‘Premiers Grands Crus’ of malt whiskies – they can vary from highly perfumed, light-bodied confections perfect for a summer’s afternoon, to chocolate and fruitcake-rich digestives, comparable to old cognac. 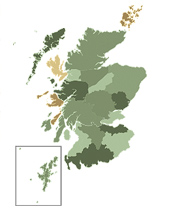 From the island of Islay come rich, iodine-flavored, very smoky. very peaty whiskies, two examples are Laphroaig and Lagavulin. The six distilleries currently in operation on this beautiful island of Islay produce some of the most aromatic of whiskies. 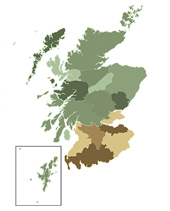 This is the region of Scotland south of an imaginary line drawn from Greenock on the west coast to Dundee in the east. The whiskies produced here are regarded as lighter in body and color and less assertive than their highland neighbors. Lowland whiskies emphasize the malt more than peat (as in the highlands) or brine (as in the islands). Two whiskies that typify this region are Littlemill and Bladnoch.